You are here: Home / FISH AND AQUARIUMS / Can Betta Fish Live with Goldfish? (The Most Useful Tips)

Be better at knowing what your betta fish likes and dislikes. And so it’s necessary to ask; can betta fish live with goldfish? If they can, will they or will they not bite? If you’re worried about leaving your betta fish alone in the fish tank. And you want to introduce a new fish to the gang. This article is for you.

So what is the final answer? The truth is that you cannot put betta fish and goldfish together. For starters, they’re both irritable species. And so there’s a high possibility that they might fight, at times. And that’s just one of the reasons why betta fish cannot live with goldfish.

For the purposes of this article, I’d like to talk a little about betta fish. Betta fish originate from Southeast Asia. They are well-adapted to low-oxygen muddles, streams, and other water bodies.

The unique trait of betta fish is that they often gulp air by swimming to the surface of the water. And they also sometimes sleep on plants. Being adaptable, they are often misunderstood as being resilient, too. But that is not the case.

Betta fish cannot survive in dirty, ammonia-rich, and cool water. They need plenty of space, surface area, and clean habitat to survive. If lacking, this stuns their growth which can lead to diseases. And a responsible fish parent, you don’t want that for your betta fish.

Having said that, most of you know betta fish are aggressive. You can’t keep two male betta fish in the same tank and expect them not to fight. And they will literally fight to their deaths.

The best way to keep a betta fish happy is to not provoke them. That being said, you can keep them with friendlies. Such as snails, ghost shrimp, catfish, neon tetras, and others.

Goldfish and betta fish are alike because they both originate from Asia. Goldfish belongs to the Koi family and are most often seen in koi ponds around the world.

Among the various types, you’re probably more aware of Comet goldfish. These are bright, orange-colored fish that are found in most pet shops.

Comet goldfish are heavier and longer than Common goldfish. And no matter what people say, they do not belong in fishbowls less than 20-gallons. This is for a single goldfish as they thrive in temperatures lower than 74 degrees.

You should know that goldfish are dirty creatures. This means they make the water dirty with ammonia faster. So constant water filtration is a priority.

And as they grow bigger, they develop a strong sense of self. This means they attack easily, especially smaller fish. 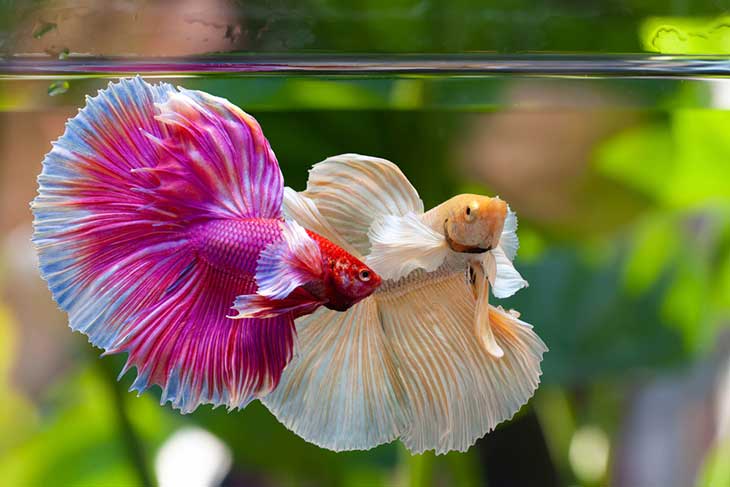 Can Betta Fish Live With Goldfish?

This is not only their conflict. Betta fish and goldfish do not share the same living conditions. This is also what makes them incompatible to stay in the same tank. Here are a few examples:

The way betta fish lives are different than the way a goldfish does. Being a tropical fish, betta fish can only swim in waters of around 78 to 80-degrees Fahrenheit. Meanwhile, goldfish need a water temperature of about 74-degree Fahrenheit.

Betta fish can live in a tank much smaller than a tank for goldfish. That’s to say, for a betta fish the ideal capacity is around 5 to 10 gallons. Though the capacity is less, betta fish need a larger surface area.

This is because betta fish swim up to the surface to ingest air. They may not do this all of the time. But it’s more frequently than goldfish.

And contrary to popular belief, a goldfish loves more space. This means a single goldfish would need about a 20-gallon water capacity. This is because goldfish mature bigger in size than betta fish. And so they require more space to move around and breathe.

Betta fish are not as dirty as goldfish in terms of waste. The latter secrets more waste leading to a higher ammonia level in the tank. And a spike in ammonia levels can put the life of betta fish at risk.

So you constantly have to clean the water tank when you betta fish and goldfish together. And facts tell me that betta fish are sensitive to such sudden changes. If you change water frequently, it can disturb and stress betta fish out.

Betta fish are not as enthusiastic plant-eaters like goldfish. They prefer to consume more meat than plants. While goldfish eat both plant and animals. Betta fish need more protein to survive and live healthily.

So when you put two and two together. It’s obvious that feeding both fish together is going to be a task. Because betta fish also eat plant roots which are the food for goldfish too. And you don’t want them to fight over their food even though you’ve put plenty in the tank. 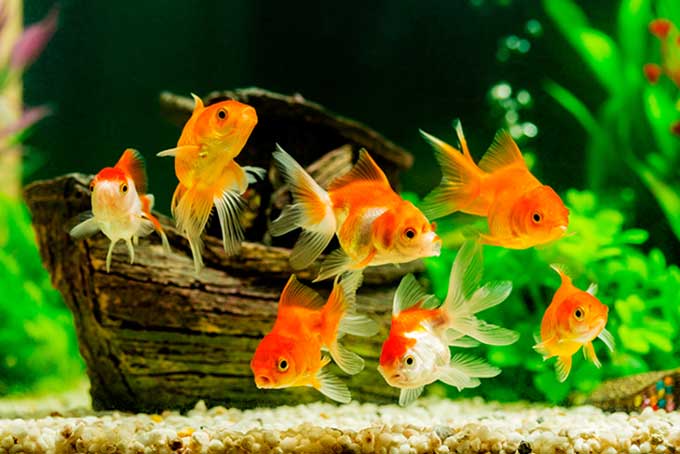 5. But the Same Attitude

The one thing both betta fish and goldfish share is temperament. Both have a short temper and will continue to fight. But only if the goldfish teases the betta fish. Goldfish feel superior to betta fish as they grow bigger in size and have stronger fins.

The way betta fish and the goldfish fight is by nipping each other’s fins. And goldfish grows bigger than beta fish, this means more clashes. Because of betta fish, the raging goldfish’s attitude is taken as a warning.

It’s obvious to you now why keeping a betta fish with goldfish is a bad idea. Both species are similar interests but they also don’t. And that means they will have more and more reasons to fight. Such as for food, sleeping, or just by appearance!

In the natural habitat, a goldfish wouldn’t flinch before eating a betta fish. This also includes any small fish species and invertebrates. And betta fish are no less! They have a bad temper and always fight to their death. So what do you think will happen in a small fish tank?

I hope this article answers your question; can betta fish live with goldfish? All these reasons are good enough to keep them separate or choose from either one as a pet.

You want to read more: Best Goldfish Food: Here Are The Top 10 Contenders!