Cute little creatures, guinea pigs are a lot you don’t know. Even though they’re very popular as pets, not many pet owners know much about them. But this is not necessarily a bad thing. However, if you want to be a more caring, loving, and responsible pet parent. Then you should find out everything you can about these adorable little critters.

That said, here are some fun, interesting facts about them.

What You Probably Don’t Know About Guinea Pigs Already

Image by Markéta Machová from Pixabay

#1 Are They Mammals Or Rodents?

The majority of guinea pig pet parents don’t know that guinea pigs are both mammals and rodents. They belong to the Caviidae family. In simple words, guinea pigs’ association with coypus, capybaras, porcupines, agoutis, and chinchillas is quite close.

Hamsters and guinea pigs, on the other hand, are different creatures. The former is smaller in comparison to the latter. And hamsters are also omnivorous, which means they consume vegetation and meat. On top of that, hamsters just live for 3 years. And are much quieter than guinea pigs.

#2 What Are Guinea Pigs Also Known As?

The one popular name for guinea pigs is cavy. It’s the short form of the official term used for them. That is Cavia porcellus, hence cavy.

Are guinea pigs actually related to pigs by any chance? NOPE, they’re not. And they also don’t originate from Guinea.

So why the word “guinea”? It’s because they come from Guyana country. The word “pig” is used for describing their pig-like stout bodies. The piggy appearance is hard to dismiss, isn’t it?

Speaking of which, here’s something relevant.

#3 The Body Of A Guinea Pig

More like tailless rodents, guinea pigs have a stout body. They have a tail vertebra but without the tail. Then comes four toes on the two front feet and three on the hind ones. Let me also bring to your attention that the front feet guinea pigs often use to groom themselves. Aside from using them to walk on four feet.

How many bones do they have? The number if 258. We humans have 206 bones. That means cavies have more bones than you and me. The number of teeth is 20, which includes the four visible front incisors.

Now here’s something more interesting. Guinea pigs don’t sweat, unlike humans. And they’re highly likely to suffer from a heat stroke when left in the sun for too long. Or when the weather is very hot. This explains why they love sitting in shade every chance they get. So as a responsible and caring pet owner, you should probably know this.

How to Care for a Pet Guinea Pig

Guinea pigs were domesticated in the Andes around 2000 B.C. More specifically, in Bolivia and Peru. They were mainly kept for food. Although some children started to raise and care for them as pets as well.

But it’s during the 16th century that cavies became more popular as pets. It’s because of Spanish explorers that began to bring back guinea pigs from South America. At first, they were pets for the wealthy and elite class only.

It’s not surprising to find guinea pigs even now being served as food in South America. In fact, these little creatures in Ecuador, Bolivia, and Peru are consumed in roasted form. The roasted dish is called cuy. Many restaurants in the US as well as serve cuy.

The domesticated version of guinea pigs doesn’t exist in the wild anymore. But other guinea pig breeds do. Like the Brazilian or Montane guinea pigs.

A healthy guinea pig lives for 5 to 8 years. It’s important for you to care for your pet properly if you want him/her to live longer.

Making sure your cavy feels comfortable is the most important thing. So it’s only common sense to buy good, high-quality food and even equipment like a guinea pig cage. 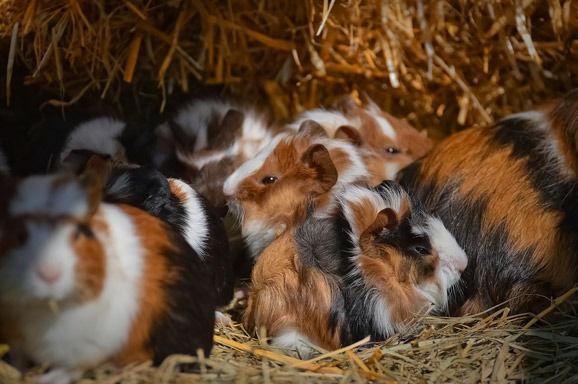 Image by Alexas_Fotos from Pixabay

The female version of the tiny creature is known as a sow. And male guinea pigs are called boars. As for babies, you can call them pups.

A sow stays pregnant for around 70 days. Pups are then born with open eyes and fur. And they start to run in a matter of a few hours only.

They are herbivores, so they get by on hay and grass. The best food is Timothy Hay. It has high fiber content and low fat. Guinea pigs love foraging outside. They go for dandelions, clovers, and grasses.

The teeth of a cavy grow throughout his/her life. So constantly gnawing is very important for them. It allows them to wear down their teeth. Because of gnawing constantly, they are also called bottomless pits.

With regards to food, you should know that guinea pigs cannot produce Vitamin C naturally. The body just is not able to do that. This implies including Vitamin C supplements into your cavy’s diet. You can do so by incorporating natural sources of Vitamin C. These include leafy green vegetables and Vitamin C-packed pellets.

Let me tell you what guinea pigs love to eat. Capsicum, parsley, spinach, carrot, broccoli, and corn. In the case of vegetables, make sure they’re raw and fresh. Avoid feeding cooked vegetables to pets.

Fruits should be given only once a week. And that’s because fruits have high sugar content, so they might cause obesity. You can feed strawberries, apple, and pear.

Now comes a piece of information you might want to know. Guinea pigs practice coprophagy, meaning they consume their own poop. Their poo consists of soft pellets known as cecotropes. These contain nutrients, so cavies eat that only.

They cannot stay hungry for more than 8 hours. So it’s your job to make sure they have access to freshwater and food. 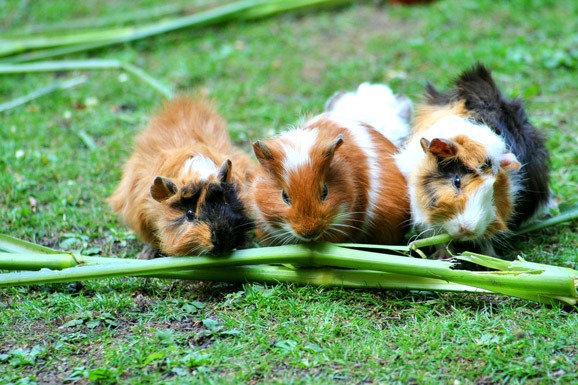 Image by Viola ‘ from Pixabay

Did You Know These Facts?

As the endnote, I would just like to say one thing. That you should be able to interact with your guinea pig. Because the more you do that, the more your pet is going to trust and love you. Try sitting them on your lap, and see how they purr and fall asleep.

They are very friendly and cute little creatures that deserve your attention. And only by getting to know more about them will you be able to provide proper care.