You are here: Home / For all Pets / Pet Myths Debunked – Do Pets Really Do That?

Mankind has been domesticating animals for millennia and in all of that time, pet owners have continued to inspire all sorts of all wives’ tales, superstitions, myths and exaggerations about their pets. Provided below is a breakdown of many common pet myths related to dogs and cats, as well as the reality of what those myths try to explain.

While cats are hardly the biggest fans of water, feline disdain for H20 is not a universal truth. The main reason most cats are averse to water is their coats. Because cat fur does not dry quickly, that wetness lingers around long enough to make a cat uncomfortable and can even lower body temperature.

Having that much water hanging around within the fur weighs a cat down and makes them less agile. Lastly, remember that all cats trace their ancestry to the Egyptian Mau, a desert-dwelling creature.

On a more behavior-related note, some owners will use a spray bottle filled with water to discourage bad behavior in their cats. Understandably, this can foster an associative hatred for water within a cat.

2. Cats Always Land on Their Feet

Cats possess a “righting reflex” and surprisingly flexible backbone, giving them an exceptional ability to twist around in mid-air and land upright.

While this gives cats a greater ability to minimize fall damage, it does have its limits. Just ask any animal hospital and they will likely share a few stories of treating cats who fell too far.

While this expression has popped up in countless sources, cats have as many lives as anyone else. The myth likely arose out of the cat’s natural proclivity for surviving great falls, earthquakes, and other disastrous occurrences with little to no damage following them.

4. Cats Can See In The Dark

Cats do not have true night vision, but do see better than humans. A cat’s corneas are considerably thinner than a human’s and their irises can open up much wider. Both qualities allow them to take in more light.

When combined with the greater number of rods within their retinas, you have an animal whose eyes are exceptionally capable of seeing better than a human by way of making more efficient use of minimal lighting. Cats also possess a reflective component to their eyes, placed to the rear of the sense organs, that allows their eyes to glow when looking into a light source.

Most people think that animals are either nocturnal or diurnal, but some animals, like cats, are actually “crepuscular.” This is an activity cycle that “activates” during the late hours of night and into the wee hours of morning. While cats are crepuscular by nature, they can be nurtured to adapt to their owner’s routine.

Cats usually only sleep when their home is quiet and empty, and their energies rev up once people start filling the house. While cats may sleep at night, they are likely going to wake up at least a few times due to that genetic activity cycle. If you want to counteract those late night “zoomies,” consider giving your cat a warm bed, some toys to keep it entertained during the day or even engaging in a play session shortly before you head off to sleep at night.

While fiction is deeply saturated with giving milk or cream to cats, cats develop a lactose intolerance as they age into adults. If you feed your cat a balanced diet, you can avoid any sort of nutritional deficiencies, but surprising them with regular milk can lead to an upset stomach.

Of course, if you happen to live on a farm with cows and regularly feed your cats that sort of milk over their years, they will never lose the digestive enzyme that breaks down lactose.

Anyone wishing to give their cats milk should choose a lactose-free variety and remember that milk has calories that can contribute to weight gain if left unchecked.

7. Cats Purr Because They Are Happy

Part of domesticating an animal involves observing that animal’s body language and the sounds they make. Some research has understood while cats will purr when they are content, they may also purr as a self-comforting mechanism during times of stress or sickness. As an aside, big cats, like lions and tigers, lack the ability to purr.

People tend to think that a dog can only see in black and white, and may even rant about that being one reason why they are simple, lovable creatures. The truth is that while dogs are not equipped to see all colors on the light spectrum, they can shades of blue, yellow and green. A dog’s eyesight is generally blurrier than a human’s but this is why their sense of smell is so much more evolved.

2. A Dog’s Mouth Is More Sanitary Than A Human’s

This is more of an exaggeration than a myth, likely arising from how none of the bacteria within canine mouths affect humans. A dog’s mouth has just as much bacteria as a human’s, but none of those bacteria overlap with what is found within a human body.

Over time, dogs have gained a negative reputation when it comes to attacking mailmen. With the USPS citing more than 5,400 bites to personnel in 2021, one might conclude that dogs are out for our postal service workers.

However, it’s more than likely that dogs are acting on instincts to protect their territory. It just so happens that postal workers are the biggest perpetrators of crossing into their territory on a daily basis. Any stranger who crosses into a dog’s territory is liable to come under attack if the dog gets free. 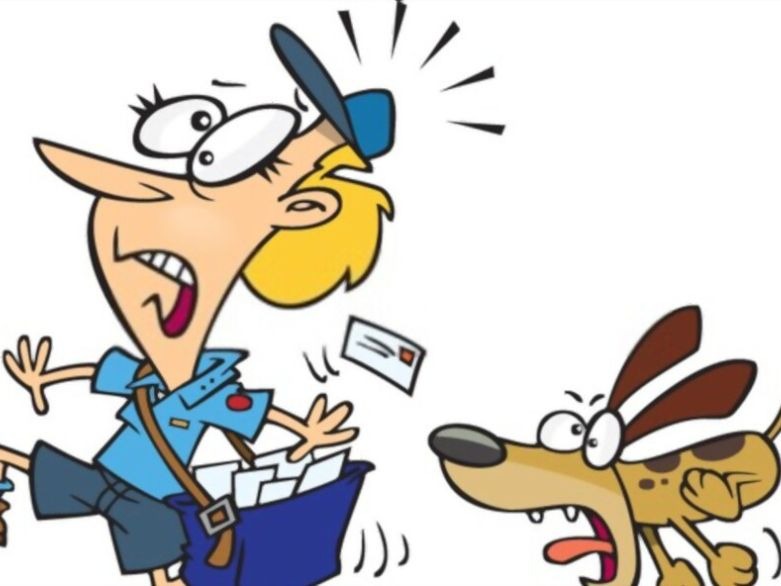 1. Dogs Wag Their Tails When Happy

Much like when cats purr, dogs will wag their tails for more than showing contentedness. Research shows that dogs who wag their tail toward the left are likely experiencing some stress or anxiety, while wagging to the right tends to correspond to positive feelings.

While folk wisdom indicates that a dog only eats grass to fix its stomach, eating grass is something that dogs will do for any number of reasons, including boredom, getting some roughage into their diet, or even a preference for its taste and texture.

Now that we’ve set the record straight, you’re empowered with the knowledge to stop spreading wrog information about our furry friends.