You are here: Home / FISH AND AQUARIUMS / Everything You Need to Know About A Pregnant Goldfish

It is easy for many beginners to overlook signs of reproduction among goldfish. Consequently, they fail to notice that they already have a pregnant goldfish until it is all too late. When this happens, there are high chances that your mature goldfish will eat the eggs.​

What can you do to prevent this from occurring? How can you keep your goldfish healthy during the mating cycle? Find out below!

When Do Goldfish Breed?

Goldfish reproduce at high water temperature. They begin breeding at a water temperature of at least 68 degrees Fahrenheit. In a process known as spawning, pregnant goldfish start releasing eggs at this heat. They are capable of delivering up to 1,000 eggs. Then, male goldfish release their sperms to fertilize a couple of eggs.

This process usually lasts up to four hours. It is easy to distinguish fertilized eggs from those that are not. The former usually comes in a transparent, golden-brown color while the latter comes in plain white.​

How to Sex a Goldfish

How To Look For A Pregnant Goldfish

A pregnant goldfish looks more rounded than a male goldfish. Then, a protruded vent indicates that she is ready for spawning.​

However, among goldfish, even the male counterparts go through some changes during breeding. Do not be surprised if you see white bumps in their pectoral fins and gill covers; it is all but part of the process.

Aside from physical indications, male goldfish also exhibit changes in behavior. Out of their desire to get started with the fertilization of eggs, you will notice them chasing pregnant goldfish often. When they do, they usually bump their counterparts’ belly and sides.

Nevertheless, constantly chasing and pursuing a female goldfish may be stressful for her. Mainly, the aggressiveness will affect her immune system. If a male goldfish lingers around her for over seven days, you need to give her a break by moving her to a separate tank. Give them a couple of days apart.

How To Take Care Of A Pregnant Goldfish

Before the breeding starts, remember to place a spawning mop in your fish tank. This will allow you to detect and catch the released eggs easily. More importantly, it will help create an organic experience for your pregnant goldfish, and that is around aquatic plants.

1 Create Your Own Spawning Mop

When making your own spawning mop, you will need the following materials:

After gathering these materials, do the following steps:

Well, there you have it— an easy step-by-step procedure on how to resemble aquatic plants in natural habitats.

To ensure that the breeding occurs and that your goldfish remain nourished, there are some things you need to do aside from raising and/or adjusting the water temperature regularly:

As I have mentioned earlier, goldfish require high water temperature settings to reproduce. Why is that?

Usually, in their natural environment, goldfish mate during the spring. So, you need to replicate these natural settings for them to mate and breed.

However, you cannot subject your goldfish to sudden temperature changes. It has to be gradual; otherwise, your pets may suffer from shock. For some, this even results in conditions such as swim bladder disease. Of course, you would not want that to happen!

Proper temperature control is also crucial when taking care of a pregnant goldfish. It affects the whole breeding process, which is why you need to be mindful of it at all times.

At first, you might be a little overwhelmed with this task. However, there is no need to worry. There are various temperature controllers on the market that can help you with your dilemma.

Here, I will introduce you to two of the most trusted thermostats when it comes to all kinds of applications— specifically, goldfish breeding. 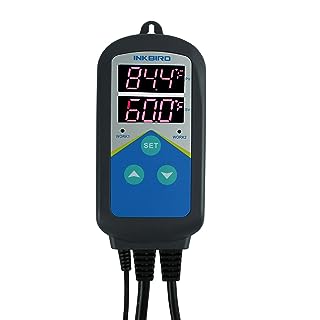 With the dual time cycle function, you can set two different temperatures. This makes it more suitable for the physiological needs of your female goldfish during the breeding process.

Further, it is safe and efficient, as evident in its over-heat protection feature. With its plug-n-play design, you will also enjoy its convenience. Speaking of ease of use, you have two temperature display options— Celsius and Fahrenheit. You would not have a hard time reading and/or be understanding the temperature readings!

This model also comes with a dual LCD. Given this, you can set the temperature and view the measured temperature at the same time.

Since it is equipped with functions such as temperature calibration and temperature hysteresis, you can be confident that the temperature readings are as accurate as they could be.

Since it has no cooling function like other thermostat models, its temperature control mode only includes On/Off and Heating.

Another great thing about this product is that it comes with a one-year warranty.

Coming from the same manufacturer as the Inkbird ITC-306T Outlet Thermostat with Dual Time Cycle, this model has almost the same features. First, it has the same plug-n-play design, which provides for hassle-free use. Then, it also gives you the same temperature reading options of Celsius and Fahrenheit.

Moreover, they share the same large power output, allowing you to set temperatures accordingly. The temperature calibration feature lets you achieve this as accurate as possible, too.

However, there is also a significant difference between the two models. For starters, this one has a cooling function— unlike the former. So, it has a dual relay feature, allowing you to connect with the cooling and heating equipment at the same time. Still, you can compare them separately or one at a time, depending on your preference and/or needs. Given this, it comes with three temperature control modes:

It has a broader range of applications other than goldfish breeding. You may use it for other home appliances that require accurate and efficient temperature control.

For a safer and more reliable experience, this thermostat also has alarms for high and low temperatures and sensor faults. Additionally, it has an automatic temperature control system.

For further convenience as well, there is a dual-LED display. Yes, they have the same dual display, but this one comes with many better-LED screens.

Which One Should I Buy?

These two temperature controllers are almost the same. They are both suitable for controlling the temperature in the tank of your pregnant goldfish.

If you do not need a cooling function, then the first one will do. However, if you want a thermostat that you can use for other appliances at your home and one with a broader range of applications, then go for the latter.

After all, Inkbird is one of the most reliable names in this industry.

Is It Worth It?

Investing in a high-quality temperature controller has its perks. Before I bought my first thermostat for my aquariums, I was hesitant. Eventually, I realized how important it is to have one. Otherwise, I might compromise the healthy living environment that my pets deserve.

Of course, once the breeding process is over, you need to maintain a lower temperature setting for your pets. Typically, a water temperature of 30 °C or 86 °F and higher already creates a stressful environment for your goldfish. Similarly, shallow temperatures also affect the growth of your pets. Even if they can live under conditions close to the freezing point, it is still not healthy for them. Prolonged exposure to these sweltering and cold temperatures may have devastating consequences.

If you are still having doubts, remember that as a hobbyist or pet parent, your top priority should be the safety and comfort of your pets. So, will having a temperature controller help you attend to the needs of your pets accordingly? Definitely!

Summary About A Pregnant Goldfish

Goldfish breeding is not that hard. As long as you know the basics, you are good to go. So, let us have a quick recap.

Goldfish breeding involves two key procedures, which are as follows:

When the breeding cycle starts, you have to place a do-it-yourself (DIY) spawning mop in your fish tank. This is a crucial part of the process to create a natural breeding environment for your goldfish.

To take care of your goldfish during the breeding cycle, you need to add more protein to their diet. Additionally, you need to change the water regularly. More importantly, you need to be mindful of the behavior of male goldfish.

I hope that this article answers all your questions about goldfish breeding. If you have further concerns, you may leave your comments below.